Yellow Island Aquaculture has been committed from the beginning to the development of local stocks and micro-adaptations to the immediate environment in order to promote animal welfare and to optimize product quality.  Because of this, the company had to initiate and develop its own hatchery program from the start in 1985. 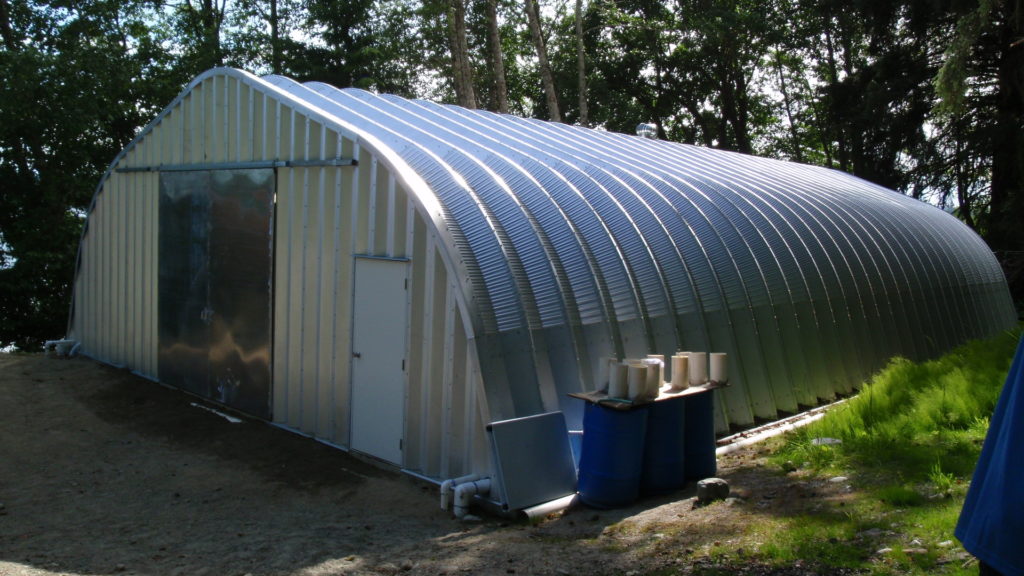 Yellow Island’s hatchery provides abundant water from a deep well which is used in rearing the animals during their freshwater phase. The use of well water minimizes the possibility of introducing any infectious agents or contaminants. The hatchery is partially recirculating to control water use and permit it to be sustaining. The well water has been extensively tested over the years and found to be free of contaminants and suitable for fish habitat.

At our Yellow Island hatchery the water comes from a deep aquifer. As is typical in these circumstances, it is low in oxygen and supersaturated with nitrogen and requires a header pond for de-gassing and oxygenation.

The use of well water minimizes the possibility of introducing any infectious agents and the water condition remains constant throughout the freshwater life of the animals.

The hatchery was originally conceived to meet the production demands of our small fish farm operation and as a result has a maximum biomass of approximately to 2500 kg. This means there is no impact on the adjacent waterways or on the ocean.

Subsequently the company added a small research hatchery facility because of the demand for space and for small rearing enclosures for scientific purposes. The company also developed natural environment spawning channels to further the development of our brood stock through natural selection techniques. Due to increases in the efficiency of our production over time these facilities were incorporated within the water management footprint of our current hatchery. 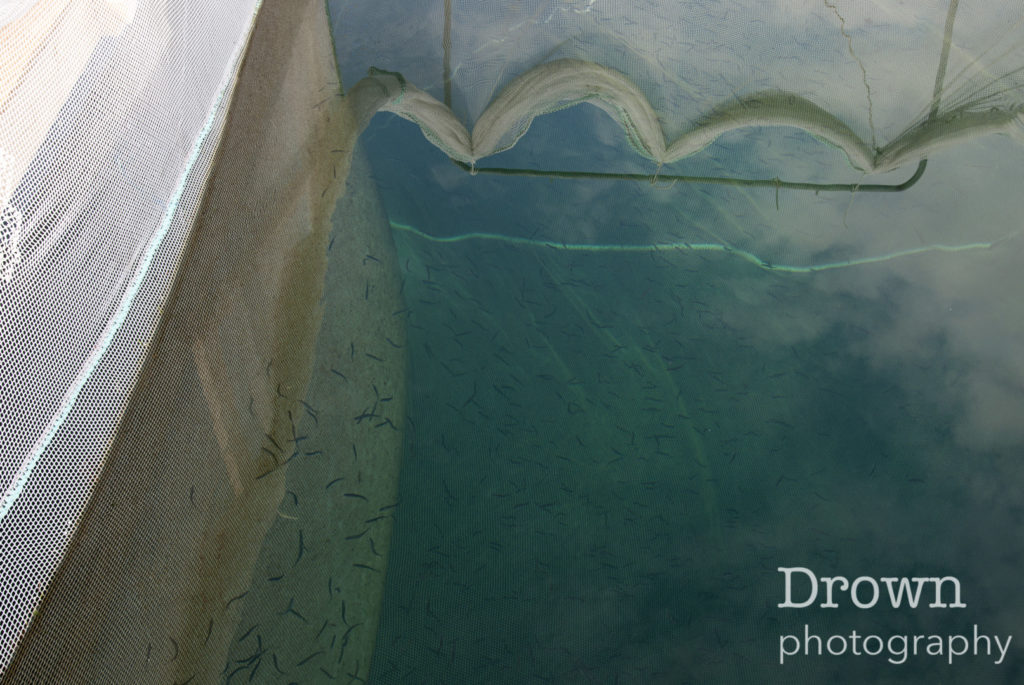 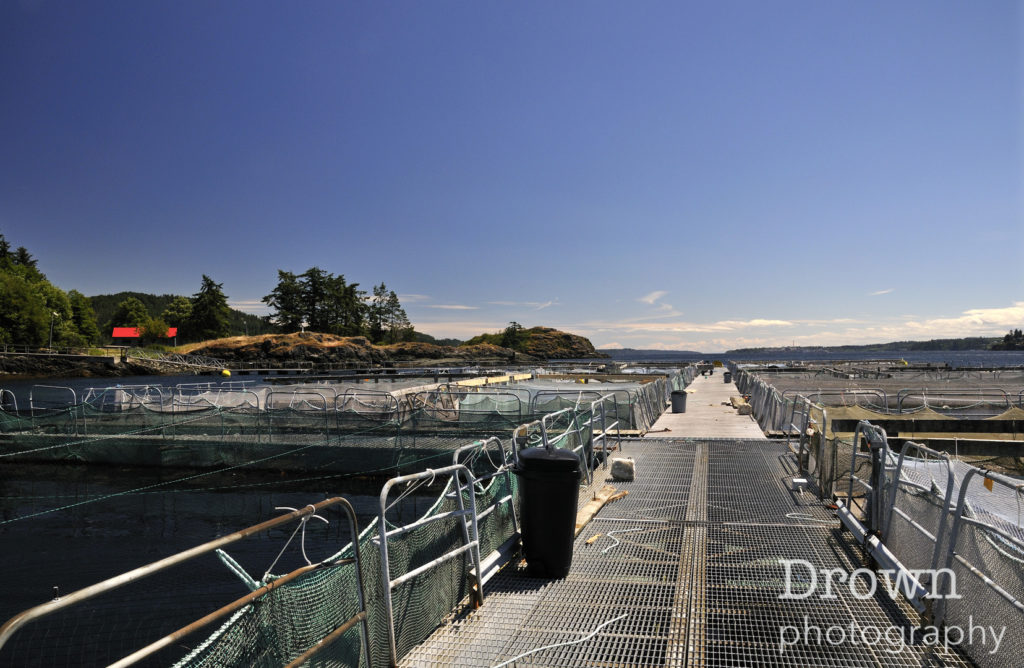 Yellow Island brood fish are sourced exclusively from our production facility which is located in the saltwater approximately 1 km away from the hatchery. Broodstock are transported by water to the hatchery in small numbers, up to 20 per boat run, to the freshwater facility when they are at an appropriate state of maturation. The broodstock are held in the freshwater facility until they reach full maturation. 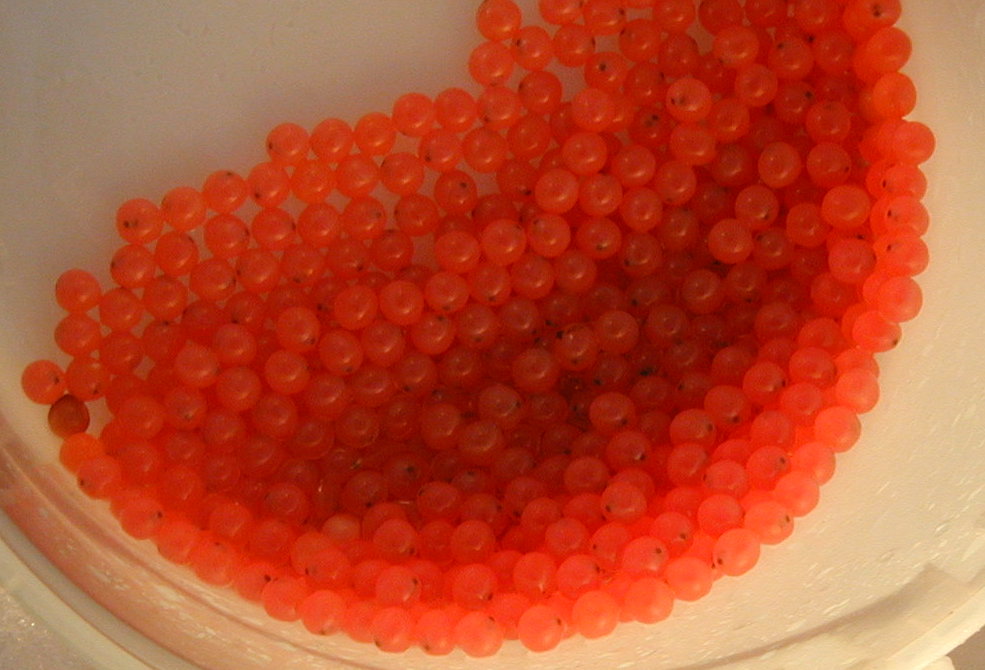 In the hatchery, brood fish are selected for collection of eggs and milt and subsequently crossed for our production purposes. Some of the embryos are treated with a pressure shock technique in a custom designed cylinder in order to induce triploidy (three sets of chromosomes). The hatchery does not use any chemicals for sterilization of the eggs relying on saltwater for the control of Saprolegnia fungus a common problem in all hatchery systems. These animals are then reared according to conventional techniques in Heath trays and subsequently modified Powell River troughs until they reach the smolt stage. 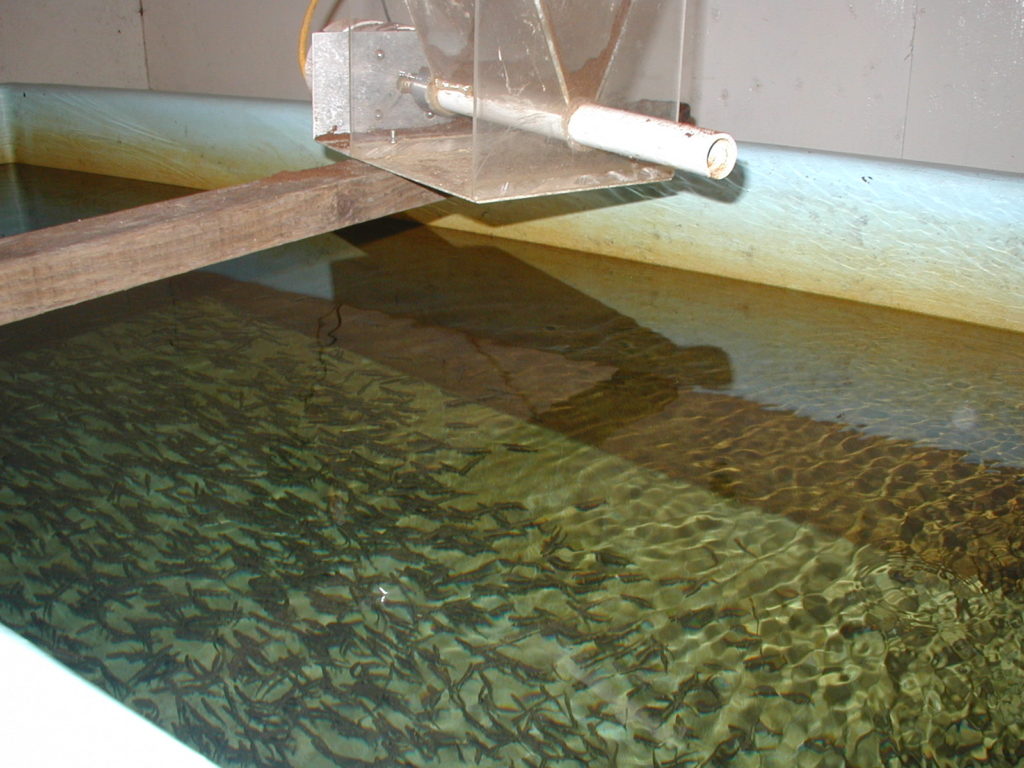 Swim up fry are fed organic diets for the entire duration of their growth. At the pre-smolt stage, fry are treated with a multivalent Vibrio vaccine and are subsequently transferred to saltwater approximately two weeks later as per manufacturer’s instructions 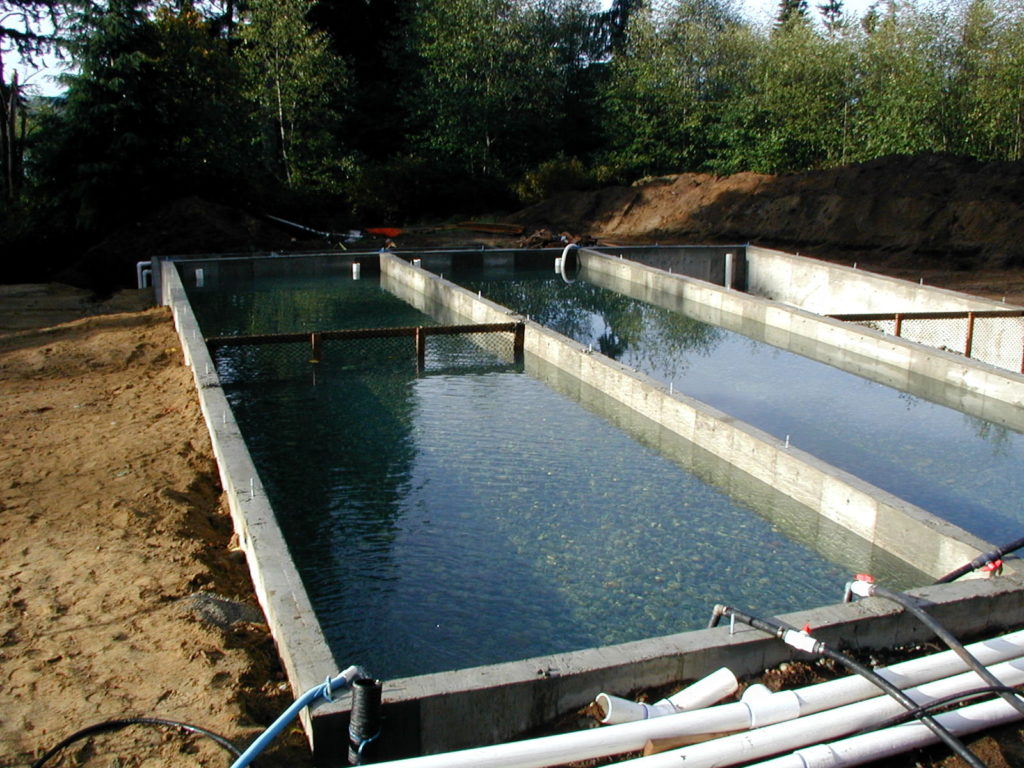 We have developed natural environment spawning channels to further the development of our brood stock through natural selection techniques.

Yellow Island Aquaculture has always been interested in taking maximum advantage of the adaptive characteristics that are present in the native species of salmon in the area. We have had long-standing concerns about the potential effects of the artificial spawning and early rearing of the animals in the hatchery situation. This is for the reason that non-assortative mating would adversely affect the ability of the animals to perform well in the local environment. Yellow Island research published in the prestigious journal Science showed at least one parameter in which these concerns were well grounded, the size of the progeny eggs.

We hypothesized that creating a spawning and early rearing environment which allowed free assortative mating and natural early rearing conditions would maximize the ability of the animals to adapt to their environment. In order to test this formally and to evaluate which components would offer most potential benefits we constructed a set of six natural rearing habitats on which the salmon could assort naturally and the fry could be reared in a broadly normal environment.

The spawning channels consist of six independent rectangular shaped rearing channels each measuring 16 m long by 4 m wide by 1 1/2 m deep. The bottom of each channel is filled with gravel. The size of the substrate can be varied if required. Channels are fenced with the rigid Vexar netting to a height of 1.5 m. Integral shade cover is used to naturalize the environment, minimize algae growth and discourage bird predation. Inflow water is from a deep well aquifer, de-gassed and oxygenated in a header pond and controlled by valves at the head of each pair of channels. The majority of the water flow is provided for by three large recirculating pumps with oxygenation in between each of the pairs of channels. Water flows and levels are controlled by the degree of recirculation which is adjusted by valves on each channel. The depth of the water in the channels can also be controlled by standpipes at the bottom of each channel. Temperature in the channels can be modulated by adjusting the degree of inflow as the well water is a constant 8°.

These channels have been used in a dozen or more major experiments and we have already seen results which indicate that assortative mating is a key factor in maintaining immune competence, normal behaviors and normal selective pressures in the stocks. We have also been able to tease out a number of other aspects of the breeding behavior of the salmon and in fact we were the first to rigorously document that spawning salmon do not stop eating completely but in fact will eat fish eggs in the water column including their own. These data shed light on a long-standing mystery in the wild which is how salmon travel as much as 2000 km in distance and up an elevation of 1600 m to the headwaters of the Fraser River and are able to maintain sufficient energy stores to spawn at the end of their journey.

These channels are currently in use in a very exciting project to evaluate the efficiency of individual mating events in naturally assorting Chinook salmon.

In addition to the scientific utility of the channels we also hope that they can eventually provide a low-cost, low intensity natural way of propagating our production and brood stock. 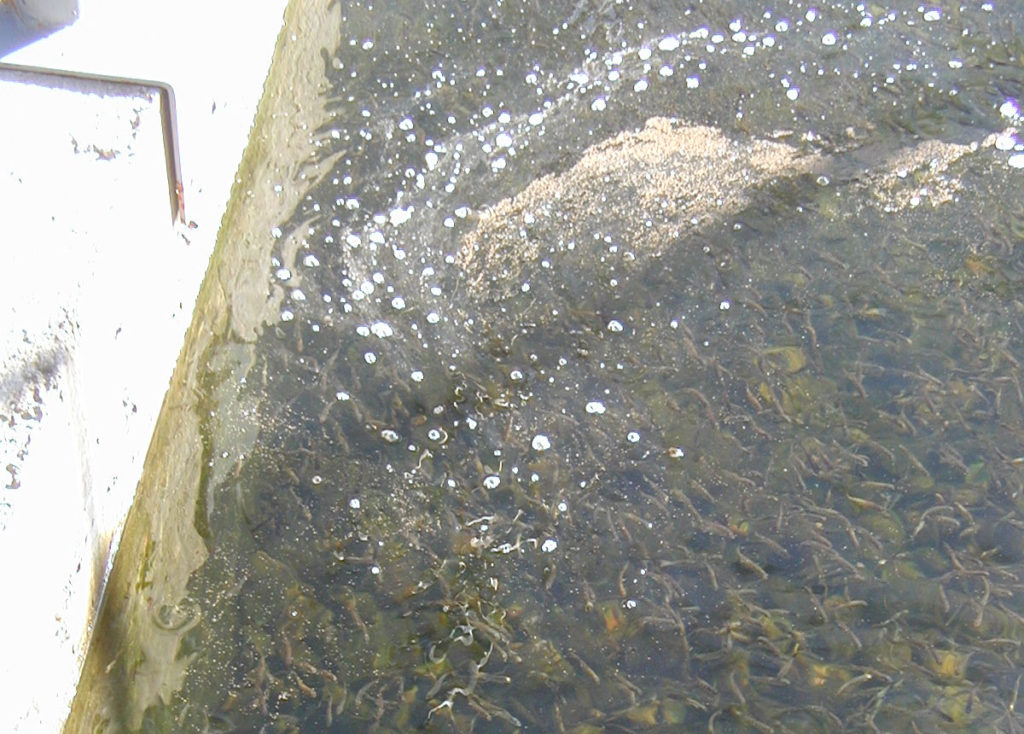 The hatchery has been instrumental in promoting our organic development program as it permits us to specifically breed and develop the strains that we need in order to sustain the organic rearing of the animals throughout their life and also enables the basic research which underlies the organic program at the facility. 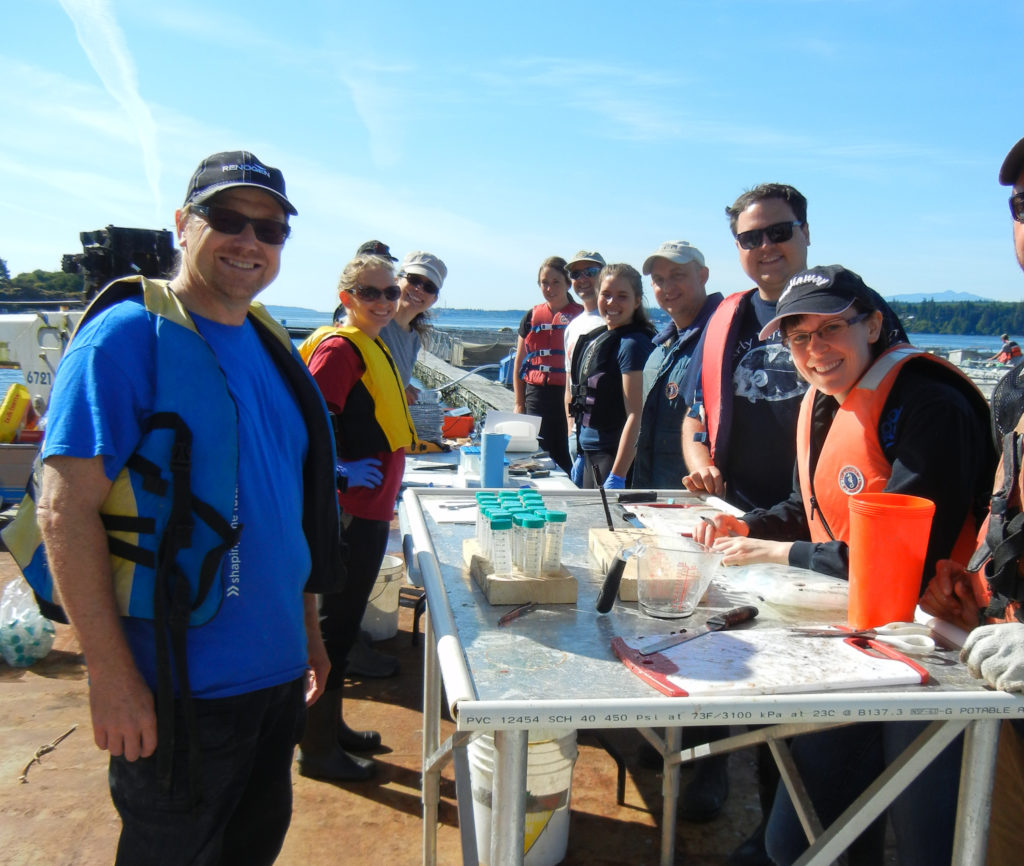 The facilities and the quality of the freshwater and salt water supply at Yellow Island have attracted a considerable amount of interest from the scientific community. In conjunction with multiple universities we have undertaken projects on several fronts to investigate the entire process of maturation, spawning and mate selection in Chinook salmon.